Forward-facing rowing for canoes and rowboats

The first is that you row it facing forward.

In the "full body" mode, the FrontRower™ gives you the same full-body power and exercise quality as conventional rear-facing sliding-seat rowing (you pull with your hands and push with your feet).  But without the need to twist around to see where you are going.

In the "hands free" mode, you have the luxurious option of rowing with just your feet.  It's hard to believe how easy this is.  The oars automatically lift, feather, and return to the front. This frees your hands for doing other things—like taking pictures, using binoculars, or eating a snack while rowing with your feet. You can row at a comfortable cruising speed using either your hands or your feet.  For more power you can use your hands and feet combined. This variety of strokes is great for changing out your muscles on a long trip.  It also accommodates some physical disabilities (see adaptive rowing). ​ 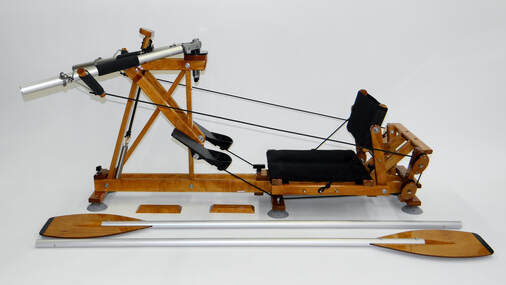 The FrontRower™ Rowing System for canoes and touring type rowboats.
I'm Ron Rantilla, inventor of the FrontRower™ rowing system.  I invented it as a better way to propel my canoe on solo canoe camping trips in the islands off the coast of Maine.

​​Paddling can be a good way to propel a canoe if there are two people paddling.  Or for one person in protected waters sheltered from the wind.  But canoes have a lot of windage (freeboard above the water line) and are not meant to be paddled in strong winds, especially solo.  Wind tends to turn a canoe broadside to the wind, and if the wind is strong, it takes a lot of turning force to overcome this effect.  A single hand-held paddle does not give you enough turning force to handle strong wind. And the wind between the islands can be strong and can come up quickly.  On one occasion, I was stranded on a small uninhabited island for three days waiting for the wind to die down.  After that experience I began thinking about a better way to propel my canoe.

Conventional rowing with a pair of oars extending several feet out from the sides of the boat gives you a lot more power and turning force than a single hand-held paddle working in closer to the sides.  But the rear facing position of conventional rowing makes it impractical for solo navigation in unfamiliar waters.

Forward facing rowing systems known as "bow facing oars" have been around since the 1800's.  They were a modification to the conventional "oarlock-on-gunwale" rowing system used on the heavy traditional rowboats of that period.  They cut the standard oars in half at the oarlock, replaced the oarlock with a direction reversing mechanism, and stuck the cut off ends into the mechanism.  With this arrangement they could face the bow and travel forward while pulling on the oar handles.  This solved the problem of going backward in old fashioned rowboats.

But going backward was not my problem.  I was already going forward.  My problem was not having enough power and control for adverse conditions.  And I was using a lightly built narrow-beamed canoe, not a heavy broad-beamed traditional rowboat. I needed a different kind of system.

The system I came up with in the beginning did not have any provision for leg power.  It solved my immediate problem well enough—it gave me a lot more power and turning force than a hand-held paddle.  But an early step in the development of this system (placing the oarlocks on a pedestal in the middle of the boat) was a radical departure from traditional rowing.  And this radical departure allowed me to look at rowing differently, which allowed me to consider and include features that are not a part of traditional rowing. Each of these features contributes to making the system easier to use, more comfortable, and more efficient. These features would not be important in a boat used for utility. But I was rowing for pleasure. And ease of use, comfort, and efficiency were important to me.

​And as it turns out, these features are important to other people too.  I think I can safely say it has become the system of choice for long distance voyaging, for high quality exercise, and for special interests such as birding and photography.

​I consider myself a cross between an engineer and an artist.  I enjoy working in my shop, hand-building rigs using what I consider the best materials available—cherry hardwood, anodized aluminum and stainless steel. I started out building something that I wanted for myself. Then some of my canoeing friends saw what I was doing and wanted me to build some for them. Then I put up a website. With a few helpers I have been building these rigs for people who appreciate something that is the best of its kind.  So far I have built several hundred rigs and shipped them to customers on almost every continent.

Most ordinary canoes make excellent rowboats, and that's what most of my customers are using—canoes they already own. Check out some recommended canoe models here.
​​
For those who want to build their own boat and want something really special, I have have designed some wooden rowing boats specifically for use with the FrontRower™.  That's one of them (the Odyssey 165) in the photo above.  For a while I was offering these designs as custom built boats, but now (at least during covid-19) I am offering them only as plans.

Check out the Slide Show to see some of the different boats FrontRower™ owners are using.
"It's a first-class rig, ingeniously put together, for serious rowers."
- WoodenBoat Magazine

Where the FrontRower™ Fits In

The organized sport of rowing
The Head of the Charles Regatta in Cambridge, Massachusetts typically has more than eleven thousand participants and a quarter of a million spectators lining the banks of the Charles River.  This is what most people think of when you mention rowing—a highly competitive sport between elite athletes and requiring years of training.  But this is not what the FrontRower™ is all about. It did not evolve out of this tradition and it violates just about every rule of competitive rowing.

Wilderness voyaging
The FrontRower™ evolved out of a different tradition.  One of taking occasional breaks from everyday life to experience the refreshing qualities of nature. This involves slowing down and focusing on your surroundings. Taking a trip in a small human powered boat is good way of doing this.  The FrontRower™ makes it easier for you to travel longer distances and get to more interesting places.  And it makes it easier for you to focus on your natural surroundings.

​“And into the forest I go, to lose my mind and find my soul.” —John Muir.
Daily exercise
The FrontRower™ gives you the same high quality low impact exercise as rear-facing sliding-seat rowing or indoor rowing on an erg. But it's easier to use, has a quick learning curve, and is more fun than rowing in a gym.  And you don't need to be athletic to use it. At low intensity levels it is easier than walking.  At higher intensity levels it can be vigorous exercise for cardio and interval training.  The forward-facing position makes everything easier, safer and more enjoyable.

Photography and birding
The ability to handle photographic equipment or binoculars while rowing with your feet is a great feature for photographers and birders.  And the forward-facing position lets you see wildlife before you scare it away.

Adaptive rowing programs
The FrontRower™ is finding its way into adaptive rowing programs, where it allows folks with upper body disabilities (such as arm amputations) to enjoy the benefits of rowing
​
Going fast
And for those for whom going fast is important it is interesting to know that the FrontRower™ is capable of outperforming rear-facing sliding-seat rowing rigs in identical boats (see Blackburn Challenge on bragging rights page).
Watch Video
FrontRower™ Fact Sheet
Our Rowboat Designs
Catalog and Price List
Share