Types of Rowboats and their Rigs 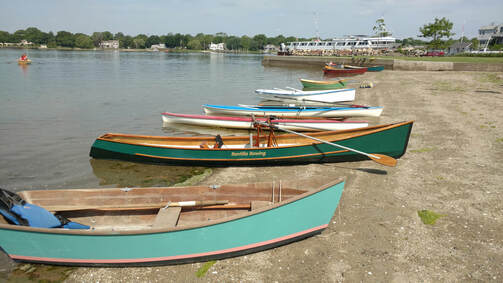 Rowboats on the beach.
A rowboat is really any boat that is propelled by oars.  Over the years rowboats evolved into different types based on the purpose for which they were designed.  Oars and associated rigging (oarlocks, seats and outriggers, footrests or stretchers) evolved along with the boats into types suitable for their intended  purpose. The following is a description of some of the different types of rowboats and their rigs.

Traditional working rowboats
These are heavily built boats designed for carrying heavy loads, usually broad beamed and with the oarlocks mounted on the gunwales (referred to as oar-on-gunwale rowing).  Smaller traditional rowboats are designed for one or two oarsmen, each using a pair of oars (one in each hand). Examples are skiffs, dories, dinghies, yacht tenders.  Originally a "dory" was a flat bottomed boat that had the bottom planks running lengthwise, and a "skiff" had the bottom planking running crosswise, but these terms have lost their meaning over time and now almost any small boat may be called a dory or a skiff. These boats are usually around 4-1/2 feet wide at the gunwales, because this gives you a good separation of the oarlock for fixed seat rowing with an oarsman sitting on the center line of the boat. The oars will typically be about 7-1/2 feet long. Larger traditional rowing boats have multiple oarsmen, each using one oar held by both hands.  Examples are whaleboats and gigs. Whaleboats are about 28 feet long and 6 feet beam and had three pairs of oarsmen using one oar each.  The oars vary in length between 16 and 18 feet. Pilot gigs are about 32 feet long with 4-1/2 foot beam and have six oarsmen sitting single file.

Touring rowboats
Gentleman's rowboats is the old fashioned name for a lightly built boat made for pleasure rowing.  Now we call them touring rowboats.  Narrower, lighter, and easier to row than a working boat.  The old fashioned ones have the oarlocks mounted on the gunwales, more modern ones usually use sliding seat rigs with oarlocks mounted on overhanging outriggers. This allows the use of longer oars to accommodate the longer hand travel of the sliding seat.  Other names for these boats are wherries, skiffs and pulling boats.

Racing shells
These boats sacrifice everything for all out speed.  They are light weight to point of being fragile, narrow to the point of having little no stability at all, and very long (typically 27 feet for a single), making them difficult to turn.  They use sliding seats and outriggers, usually integral with the boat.  These boats are also called sculls.

Canoes
Although most are designed for paddling, there is no reason one can't be rowed with a pair of oars.  In the old days, large canoes were often set up for rowing with oarlocks on the gunwales.  In modern times, tandem recreational canoes are sometimes fitted out with conventional (rear-facing) sliding-seat systems using outriggers to get additional span between the oarlocks.